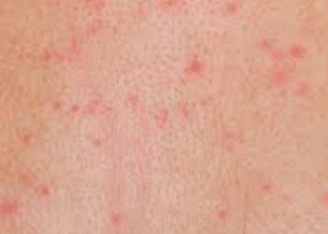 Most of the times in our current world many do people experience tiny red spots on skin. Some of the causes and the treatment methods have been discussed fully in this post. This will be useful to many who are experiencing the same in their lives.

Tiny red spots on skin, commonly known as Petechiae usually may be found on your buttocks, legs, arms, on the eyelids and even inside your mouth.

It is discovered that the appearance of these pinpoint spots on the body can be an indication of many different conditions according to their various causes. These conditions may be severe or minor.

Causes of red Spots on skin

Tiny red spots on the skin (Petechiae) are mainly formed when the capillaries break open enhancing the leakage of blood into the skin.

Some of the causes of petechiae are the infections and different reactions to the various medications. Some of the conditions that may cause petechiae include the following:

A person suffering from strep throat is likely to develop petechiae. A sore throat, red tongue, rashes on the skin are also symptoms of petechiae.

This is an infection caused by a virus which is mainly transmitted via the saliva and other bodily fluids such as the blood and the semen.

Other symptoms include the swollen lymph nodes, severe headaches, sore throat, and fatigue.

Roseola is said to be a mild contagious sickness caused by a virus commonly known as Human Herpesvirus 6. Its manifestation period varies according to the type of virus caused.

Roseola is most common in children of the tender age of about 9 months.

Signs and symptoms of Roseola include reddish eyes, high fever, a running nose and many others.

Is commonly referred to as a pimple, which mostly occurs on the neck region, face, the chest and the upper back. If not well-treated acne may leave dark spots on the skin which eventually changes the initial appearance of the skin.

These are tiny red spots on skin and itchy which when affects a person covers the entire body.

They are fluid-filled and mostly appears reddish in color.

Canker sores are small and shallow lesions that develop around the mouth region. The sores are usually so painful which can prevent the patient from taking the meals and hot drinks.

The skin that appears reddish with visible blood vessels in the face is most likely to be infected by the rosacea condition. The signs and symptoms of this condition may appear for an approximate period of one month then starts to disappear.

Rosacea has been discovered to be so common in young women but it can as well affect other people.

Syphilis is a sexually transmitted disease which is highly infectious. The appearance of the tiny red spots on skin can be as a sign of syphilis. Syphilis is caused by a bacteria.

This is caused by a fungus. This condition is very contagious although at times the effects may not be severe. The rash of the skin may be painful and easily spread during the infection.

Red spots on skin can also be a side effect of certain medications offered to humans in health centers. Some of the examples include the following. 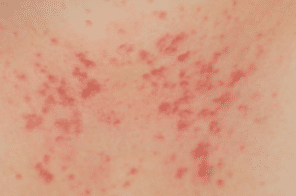 An itchy skin normally makes one uncomfortable and have the uncontrollable urge of scratching the skin. Continued scratching may lead to bleeding due to the bursting of the spots. In most cases, the spots are usually harmless but it is always advisable if the condition prolongs you should seek the medical assistance.

Skin itching may be as a result of various causes which some of them are discussed in this post as below:

Some of the drinks and food being taken by human beings may contain a variety of substances which may not concur with the human immune system.

The reaction may occur within a short period of time or after some hours depending on the immune system of a person.

There are a variety of symptoms which may occur as a result of an allergy. These include vomiting, sneezing, nausea and so many other symptoms.

This occurs mainly when you touch an irritating substance such as the various allergens. This only appears where the skin touched the allergen.

Rashes are normal skin problems which may be caused by allergic reactions, caused by a fungus or a bacteria and many other causes.

Lice may commonly attack the hairy regions of your body including the armpit, head, chest and the abdominal region.

Lice movement in the hair causes an itching effect leading to an individual scratching the affected region.

Measles mostly appears red and easily spread from the affected region to other parts of the body within a short period of four days.

Measles can be revealed through various symptoms such as a sore throat, fever, watery eyes, cough and the loss of appetite.

Substances that cause the skin to irritate when in contact are referred to as the Irritants. These may include the various plants such as the poison oak. Some insects may also have an itching effect. Such insects include the mosquitoes, lice and the wasps. Their bites can cause tiny red spots on skin.

A person who encounters itchy skin is advised to:

This kind of treatment assist to relieve pain and at most do away with the itchy condition.

Red Spots on skin not itchy

The appearance of red dots on the skin may be as a result of various causes. Different causes bring different manifestation of the red dots, their appearance and whether they will be itchy or not itchy.

There are various causes of the red dots on skin that are not itchy. These include:

Some allergic reactions to food and some other substances such as drugs may cause red dots on the skin which are not itchy.

The clumping of the blood vessels may lead to the growth of some painless red dots on the skin. This can appear in any part of your body.

This is mainly caused by the trapping of sweat in the clogged pores. This can also cause red dots on the skin which may not be itchy.

Pinpoint red dots on the skin in most of the cases indicate a serious medical condition. This kind of red dots can be irritating since they can appear on any part of your body, including the face, hands, feet, and the entire back.

From the research, it has been discovered that the pinpoint red dots on the skin are usually a sign of bleeding underneath the skin.

Immediate medication should be taken since when left unattended to may lead to a condition commonly called Purpura.

Care should be taken by the people to avoid physical injuries, and other allergic reactions as these are some of the causes of underneath bleeding which in turn causes pinpoint red dots on skin.

In most cases, the red dots usually disappear on their own but it is always advisable to seek medical assistance when the condition is prolonged.

How to get rid of Tiny Red Spots on skin

The occurrence of the red spots on the body is usually a destructor of people’s attention and may be quite annoying in a normal life situation.

The red spots on the skin may appear to be itchy, not itchy and others are usually so painful leading to scratching.

The small red spots on the can be as a result of the following:

Tiny red spots on skin can be done away with by use of the various treatment methods and some other home remedies techniques. 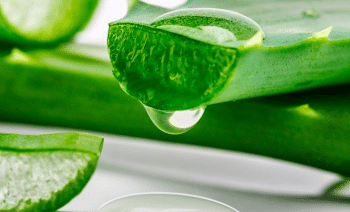 Using Aloe Vera to get rid of red spots on skin

The red spots on skin can be treated in a variety of ways which include the following discussed simple means:

The leafy part of the aloe is used in the treatment process.

This involves extracting the gel from the leaf and applying on the red spots in the affected part of the body.

The application of the aloe gel should be done at least two to three times in a day for the effective healing process.

The cocoa butter is grounded into a finer powder which is used to be applied to the affected region of the body. This should be done in very small amounts to avoid the side effects since cocoa butter has a higher level of fat content which may also cause acne if too much used.

For this case, effective healing is observed when the dandelion root powder is dissolved in the warm water.

One cup of water is enough for one teaspoonful of the dandelion root powder. This should be taken twice in a day.

The other ways that can be used to treat red spots on the skin include: